Is there any research on the effectiveness of Non-Surgical Spinal Decompression? 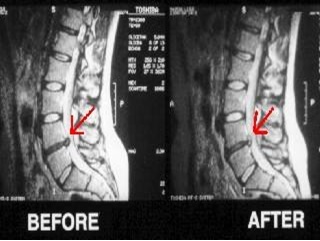 In a recent journal article in Orthopedic Technology Review titled Surgical Alternatives: Spinal Decompression, results showed that 86% of the 219 patients who completed the therapy reported immediate resolution of symptoms while 84% of patients remained pain free 90 days post treatment. Physical examination findings showed improvement in 92% of the 219 patients, and remained intact in 89% of these patients 90 days after treatment.

Another article in Journal of Neurological Research reported that vertebral axial [spinal] decompression was successful in 71% of the 778 cases. The success rate varied from 73% for patients with a single herniated disc. It was 72% for people with multiple herniated discs.

The American Journal of Pain Management reported 'good to excellent' relief in 86% patients with Herniated discs, with back pain and sciatica symptoms being relieved. Good to excellent results were also obtained in 75% of those with facet syndrome.

A small non-randomized study in Anaesthesiology News reported of the 23 patients who responded to therapy, 52% had a pain level of zero, 91% were able to resume their normal daily activities, and 87% were either working or were retired without having back pain as the cause of retirement.

In a small study to determine the long-term effects of vertebral axial decompression, the following results were obtained: 'Among 23 patients, 71% showed more than 50% reduction in pain immediately after treatment, and 86% showed a 50% or better pain reduction at four years. After four years, 52% of respondents reported a pain level of zero. Thus, pain relief not only improved but lasted. This pilot study shows great promise for long term relief and new pain management techniques.

An interesting study at the Rio Grande Hospital, Department of Neurosurgery compared the effects of 20 treatment sessions vs. 10 treatment sessions on chronic low back pain sufferers. The group receiving 20 treatments of decompression therapy reported a 76.5% with complete remission and 19.6% with partial remission of pain and disability. The second group, receiving 10 treatments of decompression therapy, reported a 42.9% rate of remission and 24.1% with partial remission. Failure rate was only 3.9% for those receiving 20 treatment sessions while it was 32.9% for those receiving only 10 sessions. Remission was defined as 90% or greater relief of pain, back to work without limitations, and abilities to carry out Activities of Daily Living (ADL's). Partial remission was defined as persistence of some pain but ability to carry out most ADL's and return to work with some restriction of duties, depending on the occupation. Failure rate was defined as no change in the level of pain and or/ADL.

As you can see from the above referenced Clinical Trials, Spinal Decompression Therapy may be the only effective therapy for some people experiencing Discogenic or Arthritic pain (pain arising from the disc or caused by various types of Spinal Arthritis). In addition, promising research suggests that the effects of Spinal Decompression Therapy can be a long-lasting solution to certain chronic back pain disorders. Although failure rates are relatively low, studies suggest that completion of prescribed treatments can reduce failure rates from 32.9% to 3.9%.

Why Us
Your First Visit
Meet The Doctor